Echoes of the White Giraffe (Paperback) 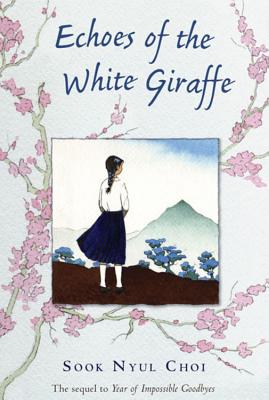 Echoes of the White Giraffe (Paperback)


Usually Ships in 1-5 Days
* “Wonderfully telling scenes evoke the time, the place, and—more subtly—the deep-running emotions that these people, bound by customs and besieged by troubles, were so rarely free to acknowledge.”—Kirkus Reviews, pointer review “Ms. Choi writes of social, political and personal hurts in a context few young Americans today have experienced. Yet she tells of more than dislocation: she tells of Sookan’s personal growth, indeed her triumph.”—New York Times

Sookan, the unforgettable heroine of Year of Impossible Goodbyes, is now fifteen years old and a refugee in Pusan, a city in a southern province of Korea. The Korean War is raging, and she once again has been separated from her father and brothers. Anxiously awaiting any news of them, Sookan imagines a time when she can return to a normal life in Seoul. In the meantime, though she often feels sad, alone, and scared, she finds solace in a forbidden friendship and from the mysterious “shouting poet” who offers her and her fellow refugees inspiration each morning.
Born in Pyongyang, North Korea, Sook Nyul Choi spent two and a half years as a refugee in Pusan during the Korean War. She later immigrated to the United States to pursue her college education at Manhattanville College. She taught school in New York City for twenty years while she and her husband raised two daughters. Echoes of the White Giraffe is a sequel to Sook Nyul Choi’s first novel, Year of Impossible Goodbyes, which won the Judy Lopez Children’s Book Award.