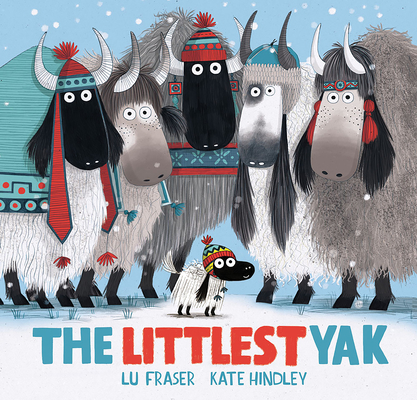 
Usually Ships in 1-5 Days
A little yak yearns for BIG things in this rollicking, rhyming picture book that celebrates individuality, unique talents, and the importance of not growing up too fast.

Gertie is the littlest yak in her pack, feeling stuck in her smallness. She wants to grow up and have BIGNESS and TALLNESS, with the hugest of hooves and humongous horns too! Because there isn't anything a BIG yak can't do.

So Gertie devises a growing-up plan. She eats her veggies, exercises every day, and reads lots of books. Still, she isn't any bigger. But when the other yaks come calling for Gertie to help them with a daring and dangerous task, could it be because it's something only a small yak can do?

Lu Fraser's debut picture book is a heartwarming and relatable story of individuality, self-esteem, and the joys of being young and small. best-selling illustrator Kate Hindley has created a delightful wintry landscape, packed with adorable yaks in woolly hats and coats. Readers won't be able to resist snuggling down with this charming read aloud.

A CCBC Choice
Lu Fraser has been helping other people tell stories for years, but she has never been brave enough to share her own—until now. Lu lives in England with her husband and daughter and writes her best stories in a little shed in her backyard.

Kate Hindley is an illustrator who has brought many best-selling picture books to life, including You Must Bring a Hat, winner of the Sainsbury Children's Book Award. She is also the author of the lift-the-flap book series Treacle Street. Kate lives in England.
"Fraser elevates the familiar story line with a well-paced rhyming text that invites reading aloud. . . . Hindley 's digitally colored pen-and-ink illustrations . . . are populated with endearing yaks, whose boldly patterned hats and scarves match the story 's cozy feel."—The Horn Book