The Alien Next Door 6: The Mystery Valentine (Paperback) 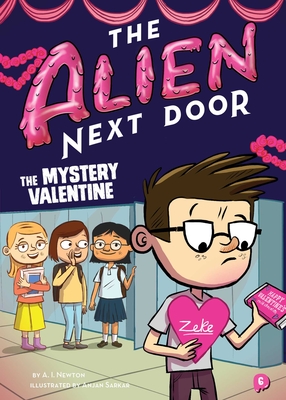 The Alien Next Door 6: The Mystery Valentine (Paperback)

Other Books in Series

This is book number 6 in the The Alien Next Door series.

In the sixth book of the Alien Next Door series, Harris explains Valentine's Day to Zeke, and Zeke develops a crush!

Valentine's Day is right around the corner, and Harris explains the holiday and its traditions to Zeke. When Zeke gets an anonymous valentine, Harris is excited to help him figure out who sent it, but Zeke is confused at the customs of Earth, and his efforts to get a girl to notice him by doing what Harris tells him to don't go quite right. Will Zeke be able to turn things around and show his valentine his feelings?
A.I. Newton always wanted to travel into space, visit another planet, and meet an alien. When that plan didn't work out, he decided to do the next best thing-write stories about aliens and space travel! The Alien Next Door series gives him a chance to imagine what it's like to hang out with an alien. And you can do the same-unless, of course, you are lucky enough to live next door to a real-life alien!

Anjan Sarkar graduated from Manchester Metropolitan University with a degree in illustration. After that, he worked as an illustrator and graphic designer before becoming a freelancer, where he gets to work on all sorts of different projects for people of all ages! He lives in Sheffield, UK. Find out more about Anjan at anjansarkar.co.uk.